RP 2018 was adopted at the 2018 AGM and became effective January 1, 2018. Full details and the principles and rationale for the RP 2018 are available on SBM Offshore’s website in the remuneration policy section under Corporate Governance.

The Company remunerates members of the Management Board for long-term value creation. RP 2018 is based on competitive remuneration aligned with the long-term performance of SBM Offshore. It is built on six reward principles: simplicity, flexibility, predictability, competitiveness, alignment and, most importantly, driving the right results.

Shareholder Rights’ Directive and proposal for amendment to RP 2018

In December 2019, new legislation entered into force, implementing the EU Shareholder Rights’ Directive (SRD II) in the Netherlands. During the AGM 2020, changes to RP 2018 were proposed to bring the policy into accordance with the new legislation. The AGM voted against the adoption of this revised policy. A new remuneration policy will be proposed during the 2021 AGM. The details of this new policy will be included in the agenda of the 2021 AGM.

This remuneration report has been drafted in accordance with SRD II as implemented in the Netherlands.

SBM Offshore believes the oceans will provide the world with safe, sustainable and affordable energy for generations to come. Our mission is to share our experience to make it happen. In executing our strategy we are guided by our Core Values: Integrity, Care, Entrepreneurship and Ownership.

The underlying principles of the remuneration policy of the Management Board of SBM Offshore N.V. support the vision and ambition and aim for long-term value creation of the Company through the Value Creation Stake balanced with pay for performance through the Short-Term Incentive (STI). Sustainability is an integral part of the STI performance areas (through Health, Safety, Security and Environment).

The Company’s strategy is aimed at optimizing, transformation and innovation of SBM Offshore’s business processes in order to grow in size and create value. This is reflected in the STI performance areas of Profitability, Growth and HSSE (Sustainability). Through the STI performance areas, Management Board remuneration is directly linked to the success of the Company and the value delivered to shareholders.

The four components of the remuneration package of Management Board members under RP 2018 are: (1) Base Salary, (2) STI, (3) Value Creation Stake and (4) Pension and Benefits. 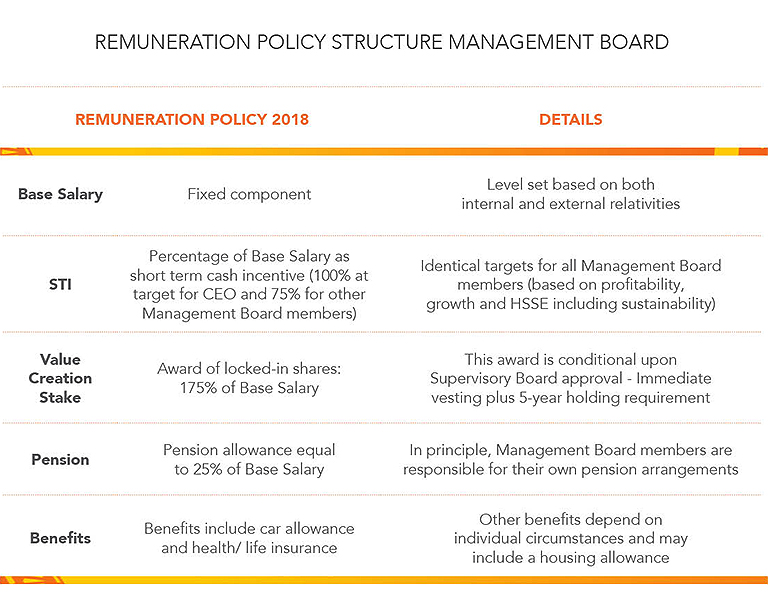 The STI is designed to create a rigorous pay for performance relationship and is a conditional variable component. The STI key performance indicators focus on three performance areas: (i) Profitability, (ii) Growth and (iii) HSSE 1. The Supervisory Board, upon the recommendation of the A&RC determines for each of the performance measures the specific performance targets and their relative weighting in the beginning of the financial year. 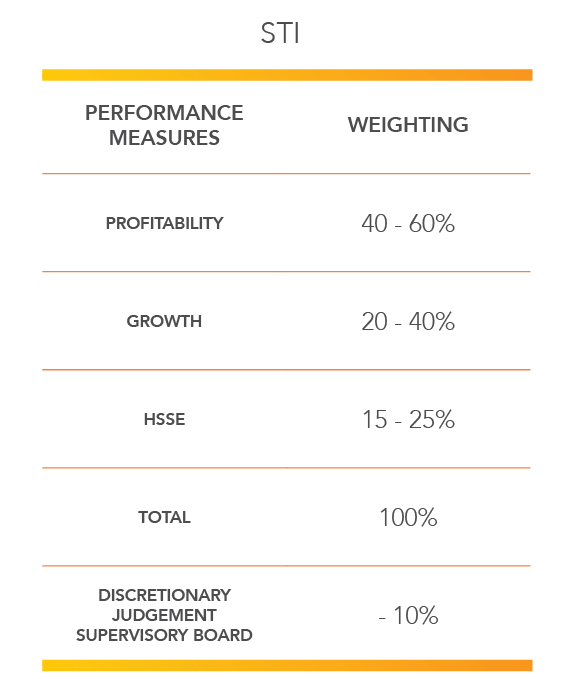 The three performance areas are specified as follows:

If the Supervisory Board is of the opinion that another measure would be more qualified as an indicator for profitability, growth or HSSE, it will inform the shareholders in the remuneration report. Performance measures will never be adjusted retrospectively.

Performance ranges – threshold, targeted and maximum - are set for each of the key performance indicators. The STI is set at a target level of 100% of the Base Salary for the CEO and 75% of the Base Salary for any other member of the Management Board. The threshold pay-out is at 0.5 times target and maximum pay-out will not exceed 1.5 times target. A linear pay-out line applies between threshold and maximum. Below threshold, the pay-out is zero.

The Value Creation Stake is an award of restricted shares to create direct alignment with long-term shareholder value. The awarded shares must be held for at least five years. After retirement or termination, the shares cannot be sold for the duration of two years. The gross annual grant value for each of the Management Board members is 175% of Base Salary. The number of shares is determined by a four-year average share price (volume-weighted). The Value Creation Stake has a variable element to the extent that the share price develops during the holding period. The Supervisory Board retains the discretion not to award the Value Creation Stake in exceptional market or business circumstances (‘underpin‘).

All members of the Management Board are required to build up Company stock of at least 350% of Base Salary. The value of the share ownership is determined at the date of grant.

In principle, the Management Board members are responsible for their own pension arrangements and receive a pension allowance equal to 25% of their Base Salary for this purpose.

Each of the Management Board members has entered into a four-year service contract with the Company, the terms of which have been disclosed in the explanatory notice of the General Meeting of Shareholders at which the Management Board member was (re-)appointed. Next to his service contract, Bruno Chabas has an employment contract with Offshore Energy Development Corporation S.A.M., in relation to a split pay-out of his remuneration.

Adjustment of remuneration and claw-back

The service contracts with the Management Board members contain an adjustment clause giving discretionary authority to the Supervisory Board to adjust the payment of the STI and LTI (as granted under RP 2015), if a lack of adjustment would produce an unfair or unintended result as a consequence of extraordinary circumstances during the period in which the performance criteria have been, or should have been achieved. However, the Supervisory Board has determined that upward adjustments will not be considered as part of RP 2018 based on shareholder feedback.

A claw-back provision is included in the services contracts enabling the Company to recover the Value Creation Stake, STI and/or LTI (as granted under RP 2015) on account of incorrect financial data.

The Supervisory Board will determine the appropriate severance payment for Management Board members in accordance with the relevant service contracts and Corporate Governance Code. The current Corporate Governance Code provides that the severance payment will not exceed a sum equivalent to one times annual Base Salary. This also applies in a situation of a change in control.

SBM Offshore does not grant loans, advance payments or guarantees to its Management Board members.